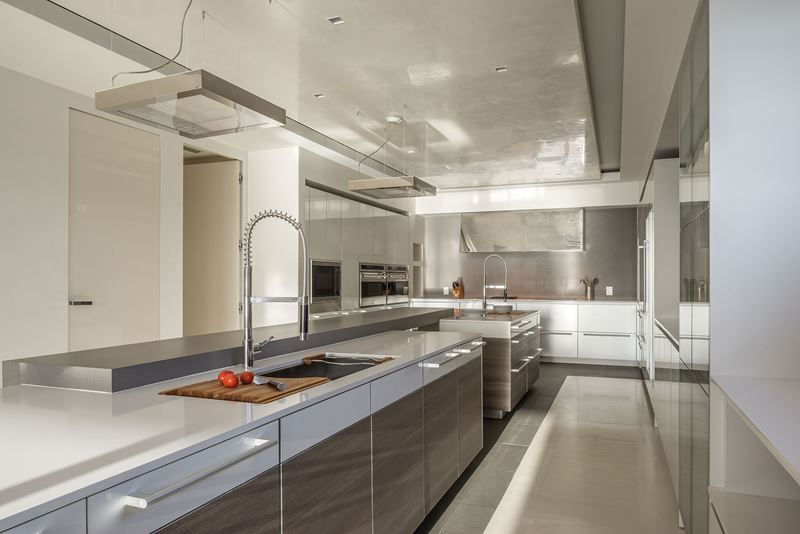 Three miles offshore from Miami, accessible only by private boat or ferry, is the exclusive retreat of Fisher Island. Yet there was nothing very exclusive or even appealing about the look of this Fisher Island condo kitchen. It was dark, dated and dysfunctional.

The designers were charged with transforming it from an old-fashioned “u” shaped kitchen to an interactive modern center island kitchen – something far more appropriate for the neighborhood. But they had a huge hurdle to get over: where to put the plumbing for the two sinks required in the center island? The construction method in the United States does not allow a drain to be relocated into a center island. So a special wall had to be created that would serve as a design element along the length of the two islands, and hide the water supply and drain pipes for the two new sinks.

“The most BRILLIANT solution to solving the plumbing problem!” hurrahed a Kitchen Design Contest judge. The judges also commended the designers for the aesthetics of the new space: “The shimmer of the ceiling and choice of the hood and light fixtures is so beautiful.”

Naturally, the integration of appliances is key to both the form and function of the new kitchen, and there is a dizzying array of Sub-Zero, Wolf, et Cove here, from the twin 36” over-and-under refrigerators to the twin 27” wine storage units (room for 264 bottles!) to the L series ovens, cooktops and so on. Yet the space is so well thought out, the appliances are hardly even noticeable.

Now the condo owners have a kitchen that has become a gathering space for their large family, with breakfast bar, television, room for several cooks and more, all in a beautiful light-filled space that might be the envy of any resident in this rarefied Florida community.