David Heide is restoring the Twin Cities, one glorious old home at a time. 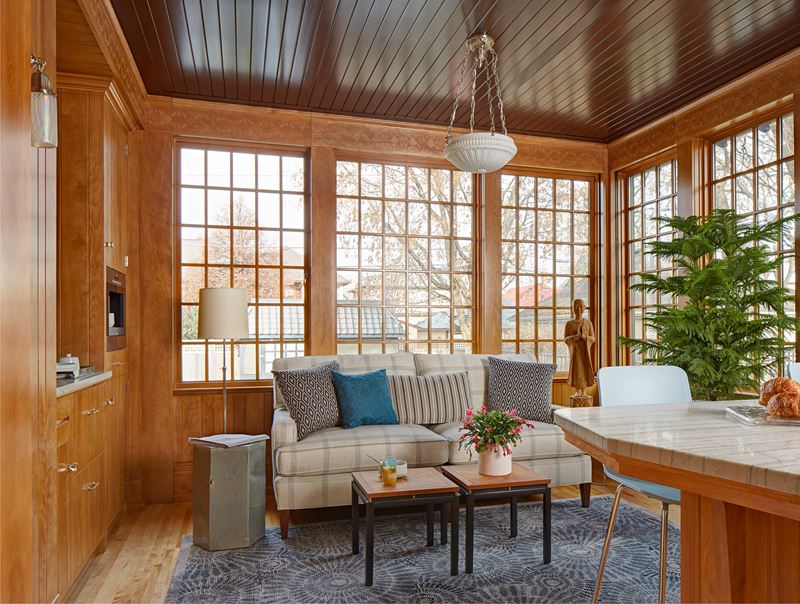 David Heide's passion for historic preservation was aroused in a very workmanlike way. A college architecture professor hired him for a summer project, scraping layers of battleship gray paint off the walls of the historic Romanesque courthouse in Sioux Falls, South Dakota, to uncover the original stenciling that lay beneath.

"Restoring that original artistry was worth the sweat and dust," says David. "There are no shortcuts in a restoration project, not if you want to be true to the spirit of the building."

A few years ago, David was on a plane to Los Angeles, and struck up a conversation with the man next to him, an IT executive. He and his young family had just moved back to St. Paul after a few years away, and purchased a 1904 Tudor that had been the home of one of his closest childhood friends. Now they wanted to restore it, make it more liveable for a modern family, but do it in a way that was true to the spirit of the home, and his cherished memories.

Who was more perfect for the project than David Heide?

The greatest challenge was that the kitchen was simply too small. But there was room to expand. David's firm, David Heide Design Studio, drew up a plan that added almost 300 square feet. It would create not only a spacious new kitchen, but an adjoining family room as well, with a badly needed first floor powder room for good measure.

The new kitchen would be highly functional, equipped with an array of Sub-Zero and Wolf appliances as well as a large farmhouse sink, but it would also evoke the spirit of 1904. The original drawings of the house had been passed from owner to owner, and contained invaluable information. For instance, David knew that the original wood species of the back of the house was red birch, so this immediately became a part of the central design. How to manage the quantity of the wood within the space became a challenge, which he met by creating a stainless steel appliance alcove – containing a Sub-Zero integrated refrigerator and freezer, and a Wolf wall oven, microwave and warming drawer – and choosing crisp light values for the stone countertops and tile backsplash.

Where did the idea for the stainless steel alcove come from? "Out of the blue, really," says David. "I don’t always do my best thinking in the office or even on site. An idea might come to me in a concert hall, or driving home from work. But once the idea for the alcove came, everything just fell into place."

Instead of the almost inevitable island, the kitchen contains only a very useful serving/work table. This gives the kitchen a refreshingly wide-open, welcoming feel that seems right in keeping with its heritage, and its clients' childhood memories. The eat-in peninsula is ideal for quick meals, and provides plenty of useful counter space.

"In my work, I want the details to be authentic – not a caricature," says David. So for this Craftsman/Tudor home, he relied on a corps of skilled craftspeople that he has developed over years. "Take the light fixtures: the metal armatures were made by a Minneapolis company, while the shades were mouth blown by an artist in California. We created a special finish for the red birch cabinetry, combining amber and garnet shellac. The rugs are hand-knotted by a rug company we’ve worked with on many projects."

Another key aspect of David’s design, of course, is the Sub-Zero and Wolf appliances he chose. "The design of the products is timeless in a way that no other brands are," says David. "It's not all quirky and stylized.  The products can hide in plain sight, or they can be a timeless centerpiece."

"In the twenty years I’ve been doing this, I've never gotten a call from any of my clients, saying there's a problem with a Sub-Zero or Wolf appliance," says David. "You want people to have that peace of mind."

When the 1904 Tudor was completed, David's client and his young family had a home that has all the comfort and modern convenience they require, but stays true to the honest, finely-crafted character of the original. The judges in the 2015-2016 KDC contest recognized the integrity and imagination in David's work, and honored him with the award for Best Traditional kitchen design.

"It's a celebration of craft, and woodworking, and true to the craftsmen roots of its architecture," said one KDC judge. "It's honest. The project unwaveringly follows the designer's intent to strike a balance between the period detailing and the youthful sensibility.  We were struck by the craft exhibited in the cabinets, the period lighting, and truly appropriate use of material. And a respect of history,” another judge commented.

"It means a lot to me, that such an esteemed group of judges recognizes the value of my work," says David. "There’s a bit of karma here too – I received the KDC award almost exactly twenty years to the day I started my practice. I’ll always remember that."