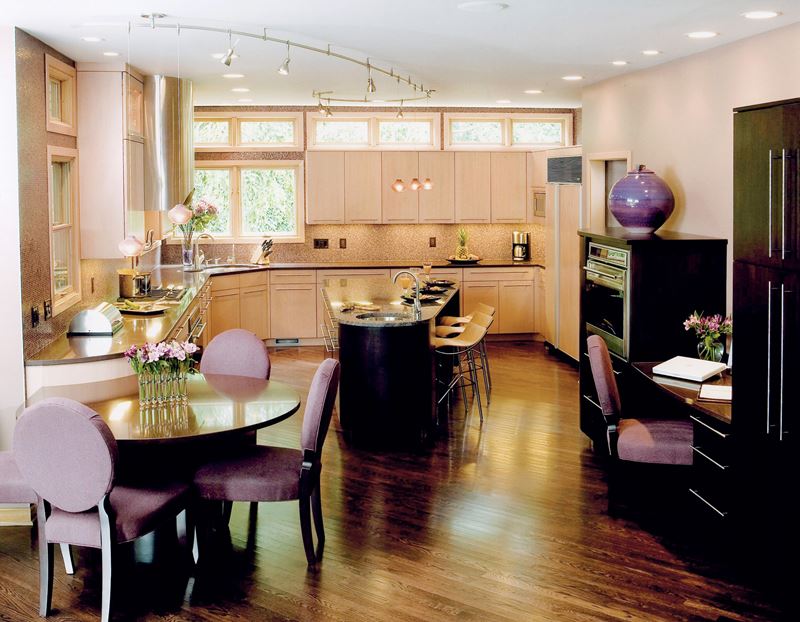 A modest request to update mauve laminates launches a 1980s kitchen into the 21st century as a showpiece of casual, high-performance style.

John and Linda Botsford originally asked kitchen designer Kimball Derrick to simply reface the mauve laminate kitchen cabinets inside their circa-1970's contemporary home in Cincinnati, but Derrick had much grander ideas. He wanted to reconfigure the space the couple had originally designed with an architect, into one suitable for socializing and entertaining, and soon the kitchen became part of a larger home remodel project with interior designer June Surber.

Derrick rezoned the entire space for flow, tearing out a closet, installing a pantry cabinet, and placing a new Sub-Zero refrigerator where a cooktop used to be. He shifted desk and island seating to the room's perimeter, and replaced the combination of small cooking island and dining peninsula with one, wedge-shape island. A tall cabinet with roll-outs next to island seating hides a full cocktail bar. Today, whether cooking and entertaining friends, or having caterers prepare and serve food, everything flows. "The clients were flabbergasted when it started coming together," says Derrick. "The space became much larger and easier to move around in. Plus they gained a lot of countertop."

A dramatic visual foundation was created by staining light oak floors a darker mahogany throughout the home, then re-facing kitchen cabinets and the couple's existing Sub-Zero in Beachwood. Wall and island curves are repeated in island seating, track lighting, and a custom exhaust hood. The Wolf 36-inch cooktop and Wolf 36-inch single oven resemble a range and accommodate wide catering trays. A separate Wolf 30-inch wall oven is positioned at an easy-to-reach height for the homeowner. Derrick compares cooking with Wolf to driving a great sports car. "You can be a better cook using a Wolf oven," he says. "The electric broilers replicate the best gas broilers with very advanced programming that is simple to use. Sub-Zero, Wolf, and Cove both also offer lots of flexibility and are a great platform for creativity!"