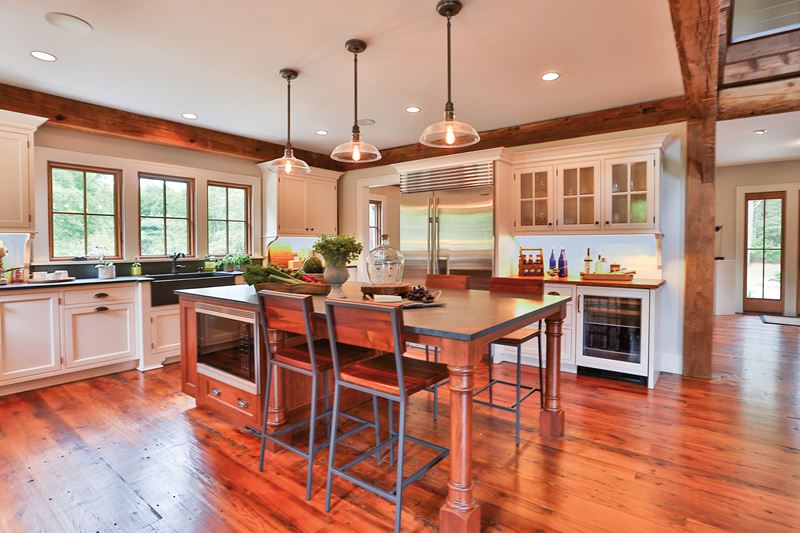 A dilapidated barn might make a perfectly fine dwelling for field mice and swallows, but an Upstate New York family knew that with an inspired design and careful re-use of materials, the ruins would become their dream home. And at the heart of their home, they could create their dream kitchen.

A major challenge was working with the post and beam structure of the barn. Even though it had been moved and reassembled, it was still not perfectly square or level. All these details were hammered out between the architect/owner and the kitchen designer, utilizing their differing backgrounds and skill sets to craft a beautiful, functional and livable kitchen.

The homeowners wanted a kitchen with a large island for their family of four to eat together – one that would double as a large serving area when they have their frequent extended family gatherings. Yes, they wanted the modern appliances that would make the kitchen highly functional for meal preparation, but the style had to be timeless and traditional, so it would feel organic to the barn that they had moved and renovated. One distinguishing feature of the kitchen is flooring from the original barn, beautifully refinished, which along with the exposed posts and beams provides a strong rustic frame for the new kitchen.

Finishes are classic: light wood cabinets with traditional pulls, Vermont slate counters and farm sink, rustic knotty cherry island, schoolhouse-type lighting. The designer chose to highlight the Wolf range and Sub-Zero refrigerator, but hide most of the other appliances – the warming drawer, for instance, has a fully integrated drawer front, concealing its convenient location flanking the range.

This kitchen is the sum of its parts: the architecture of the barn home, the symmetry of the design, and the simplicity of the cabinetry and finishes. This results in a warm, welcoming and well-appointed space for these homeowners. And it writes a new chapter for a true piece of Americana, to be cherished and enjoyed for many decades to come.