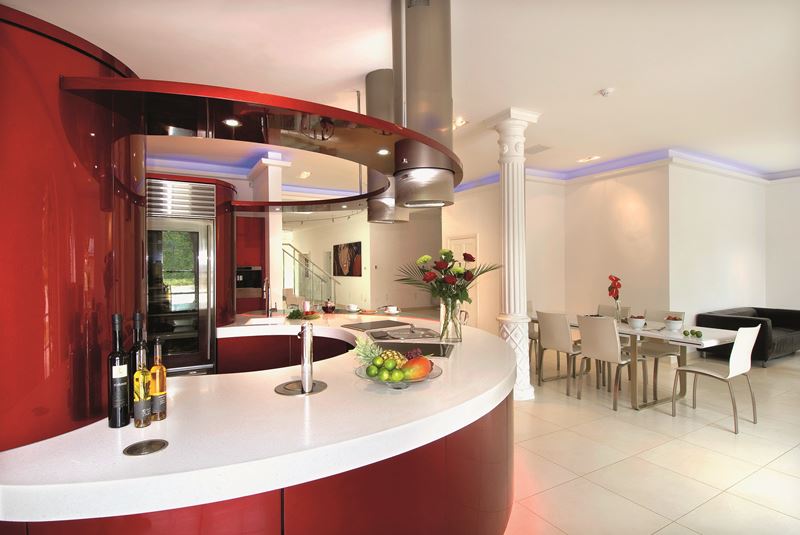 The hub of an English manor house is its iconic, eye-candy kitchen. But the cooks are its heart.

Design aficionados Paul and Claire Marsden love their large, converted stable house in the village of Radlett just outside London, but wanted their kitchen to do more. They asked Paolo Marazzi to design a space that would hit on all cylinders: be functional and ergonomic for frequent cooking, safe for their young children to participate, inviting for guests, and also make a ground-breaking statement.

Social amenities are important to the Marsdens. Even their professional lives revolve around others (he is a recruitment consultant; she, a psychologist). They were thrilled when Marazzi presented plans for a freestanding cooking and entertaining space—a showstopper where the cook is embraced within a 14-foot diameter island with everything is accessible in a step or two, and where guests would naturally want to congregate. "More and more in the U.K. and certainly in Europe, kitchens are becoming the hub of the home," says Marazzi, who added that even as an experienced designer, these clients made him think and explore former limits. The iconic presence and proportions of Sub-Zero, Wolf, and Cove worked with the scale of his design. The furniture—including two turrets at the back of the island—was built completely around them. He says the Wolf induction cooktop provided scale in a sleeker package than a traditional cooktop that is also 20% wider than the majority of what is available in the U.K., making it easier to work with.

Deep metallic lacquer animates the rounded, curved elements of the cabinetry and seamless worktop. The inlaid teardrop breakfast bar of illuminated Venetian cracked ice adds more pop to the overall wow factor. "These are very outgoing people with a sociable spirit who like to create a bit of fun," says Marazzi. "People come in and see this large, living kitchen and dining area and it brings great smiles to their faces! That was the goal."