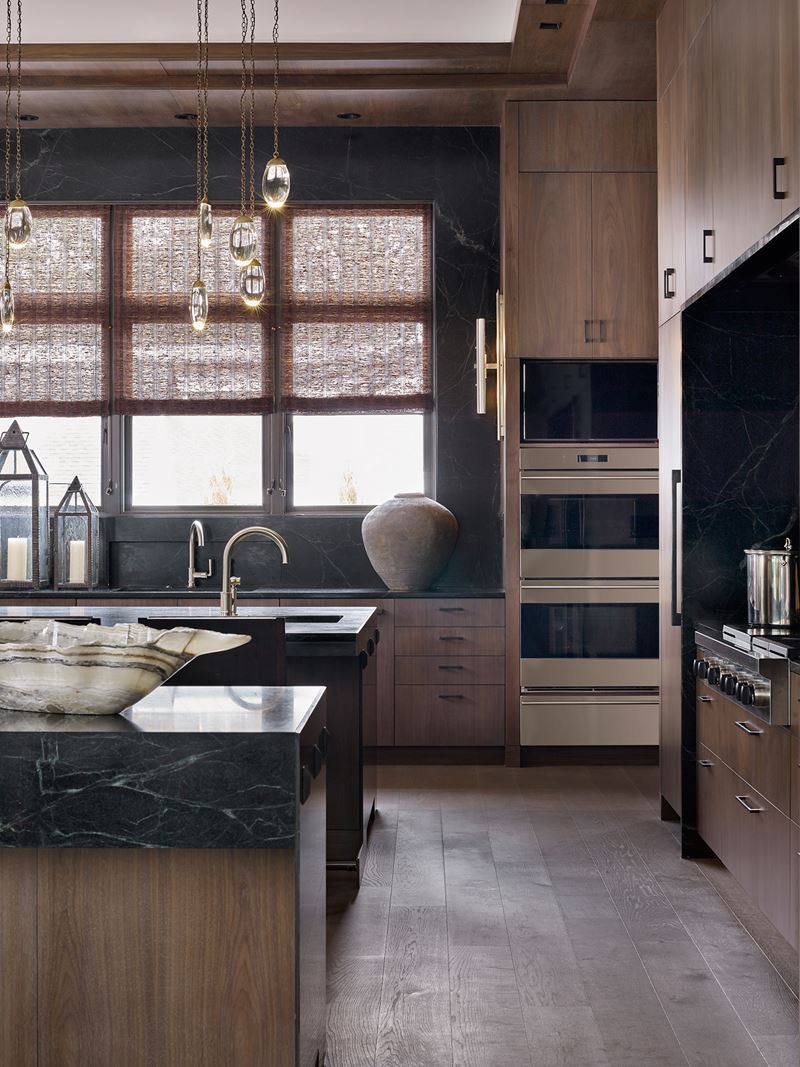 On a shopping trip to Los Angeles, the Georgia couple and their interior designer Joel Kelly stopped for a drink in the lounge of the legendary Sunset Tower Hotel, an Art Deco landmark since 1929. They imagined the icons who’d gathered here: Frank Sinatra, Marilyn Monroe, Gary Cooper, the Duke.  The lounge has a warm, intimate atmosphere, perfect for escaping the daily hustle bustle - no wonder it has always been such a popular watering hole.

Weeks later, when the three of them met to plan the new kitchen, they remembered the Sunset Tower lounge, and decided to capture that same comfortable wood-paneled atmosphere. Frankly, they were tired of the glossy white kitchens.

Joel realized that using the Sunset lounge as an inspiration would be helpful in several respects. The kitchen area was a whopping 422 square feet, with unusually high ceilings. By wrapping the ceiling in walnut and using deep upper cabinets, he could create the sense of a paneled room and give the space a warmth that a conventional kitchen wouldn’t have. The kitchen would also continue the ambiance Joel had created throughout the rest of the house, with the unexpected “punch” that his clients were hoping for.

The large footprint created another challenge: Joel had to make sure that it functioned efficiently for both daily activities and entertaining, without causing the cook wasted steps. He designed a compact 16-foot work triangle that stays clear of special event preparations, comprised of a high-powered Wolf 48” rangetop with six burners and griddle, a Sub-Zero 30” refrigerator and a small sink, on the larger of the two islands. The second island is crucial as an entertaining component needed to serve guests while keeping them out of the cook’s way.

The integrated Sub-Zero refrigerator columns were crucial in creating a seamless wall of cabinetry, and contributing to the atmosphere of a paneled room. By combining wood, stone and steel as his main materials, with a strong sense of handwork in the way the elements are joined and crafted – the islands being a prime example – Joel gives the kitchen not only warmth, but a sense of “history” too. It feels like a place that has already entertained its own share of iconic guests.

Choosing to emulate the rich, dark paneling of the Sunset lounge could never have been successful without great care and imagination in the lighting. Both decorative and directed task lighting, as well as a series of LED recessed cans for overall illumination, was incorporated into the design so that the kitchen could serve its many functions: as a backdrop for parties, an everyday meal prep area, or an intimate space for the couple’s meals together.

Ultimately, it’s hard to imagine a more handsome kitchen – or a more romantic source of inspiration.