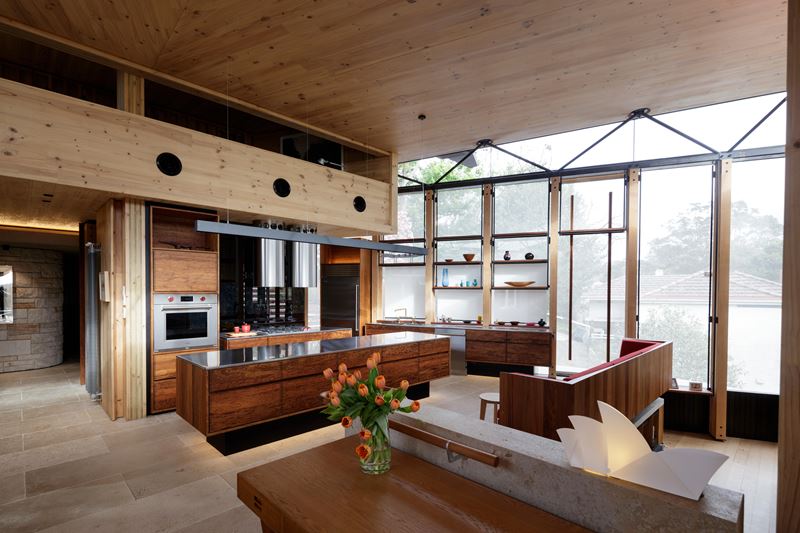 James Fitzpatrick’s Seed House seems to grow out of the landscape as naturally as the surrounding bushland. He spent more than eight years studying the land and environment to best situate and design what would become his family’s residence. Mimicking the seed pods of the neighboring angophora trees, the dwelling’s experimental form juts out of the rocky outcrop. At its core: the warm, timber kitchen.

Hearkening to the place of Fitzpatrick’s childhood, several native Tasmanian timbers serve as the foundational building elements in the kitchen. As with all of the details and materials utilized in the kitchen, each timber has a unique origin story. The light, celery top pine, used for the columns and internal linings, spent 25 years at the bottom of a lake in southern Tasmania. After being rescued, the timber took two years to dry, imparting a unique wave of color through the grain. The blackwood used for the kitchen joinery was nearly impossible to source—the timber merchant had stored the material for a quarter of a century, only releasing it for sale after the drawings for Seed House were reviewed and approved as a reverential use of the material. The timbers built the foundation of the canvas that would document Fitzpatrick’s family’s experiences in the home. To him, the kitchen is a space that should develop a sort of patina overtime—aging, growing, and adapting as naturally and beautifully as the family.

Fitzpatrick applied the same philosophy when selecting the kitchen appliances. They should be durable and functional, accepting the scratches, spills, and mess with grace. The equipment should gain character from its use, aging in style. Selecting Sub-Zero and Wolf appliances for their quality and durability, the number and scale of appliances were limited to what would be used daily.
In a way, the building of the Seed House will never end. It will evolve and adapt just as the natural landscape beyond. As Fitzpatrick and his family make their mark on the kitchen, it will become an extension and representation of their dynamic and active life.